The new headquarter of the United Iraqi Medical Society (UIMS) was opened by Dr. Mahdi Mohsen Al-allaq in Al-Mansour/ Baghdad. With the honored presence of the Kuwaiti Ambassador in Iraq Mr. Salim Al-Zamanan and the NGOs Directorate Mr. Mohammad Taher Al-Tamimi.

In his excellency speech, Dr. Mahdi Al-allaq , said: “These years have been bitter due to the entry of terrorist gangs (ISIS) to Iraq. Yet, UIMS’ significant role was distinctive as it was accompanied by high transparency and providing highly progress of humanitarian services.”. He also praised the great role and support of Kuwait by his excellency al Sheikh Sabah Al-Ahmad Al-Jaber Al-Sabah and Kuwait ambassador to Iraq Salim Al-Zamanan.

Kuwait’s ambassador to Iraq, Salim Al-Zamanan, also referred to the support provided by Dr. Mahdi Al-allaq, the Secretariat Council of Ministers and the NGOs Directorate  Mr. Mohammad Taher Al-Tamimi. He praised their support and positive role in facilitating the work of the Kuwaiti Embassy in Iraq.

Mr. Mohammad Taher al-Tamimi the NGOs Dirsctorate ; “today, it is an honor to stand between you. I am proud of this Iraqi organization that proved itself through many activities and work. UIMS carried out by large and exceptional progress starting from obtaining the status of Public Benefit as well as obtaining the Consultative Status from The United Nations. Besides, UIMS was able to gain the trust of citizens, the Kuwaiti Embassy, the donors and the General Secretariat Council of Ministers.

Dr. Ahmed Al-Hitti, President of the United Iraqi Medical Society praised and appreciated the support of the Secretary-General of Council of Ministers Dr. Mahdi Al-allaq for his great impact on the progress of the Organization and the implementation of all projects to serve many of the needy and displaced people.

UIMS had the great chance to honor both Mr. Salim Al-Zamanan the Kuwaiti ambassador and the NGOs Directorate  Mr. Mohammad Taher Al-Tamimi. 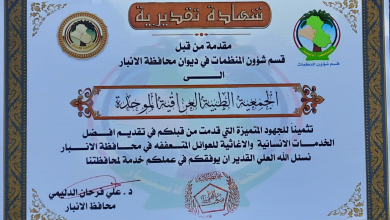 Governor of Anbar presents a certificate of appreciation to the UIMS 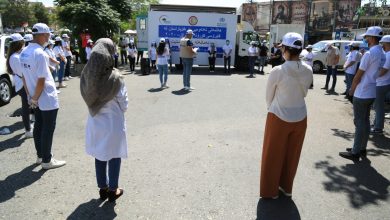 The national campaign against COVID-19 Iraq 2020